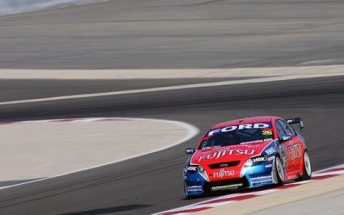 The Mackay, Queensland, based brothers will line-up in a pair of BA Falcons, after spending recent times in Saloon Cars.

Having previously been part of the Britek Motorsport Scholarship program during their karting careers, the Gariochs will jump into two former Britek Falcons this year.

The team will campaign the car that Fernandez raced in the 2006 V8 Supercars Championship (the first BA chassis built by Ford Performance Racing), and the last car that Britek Motorsport built for Jason Bright in 2007.

“I think they’ll be quite competitive to be honest,” Fernandez told Speedcafe.com.au of his new drivers.

“They’re pretty good go-karters, they’ve done some Saloon Cars, and they want to step up into V8 Supercars.

“The motivation is certainly there, and I think they’ll run ok.”

Fernandez believes that the Kumho Series, which runs on the Shannons Nationals bill, is the perfect way to gain experience in V8 Supercars before stepping into the Fujitsu V8 Supercars Series.

“I think if you look at the way the Fujitsu Series is going to run, I wouldn’t put two young kids in the category,” he said.

“With Triple Eight, Paul Morris, and so on running a car, you’d be running at the back of the field.

“A young driver may learn just as much (in the Fujitsu Series), but it’d be twice as dear, and twice as hard to do.

“The Kumho Series will mean they get the experience without the pressure.

“Then in the following year they can jump into the Fujtsu Series, already with an idea of how the cars work, the characteristics of the tyres, engines, and so on.”

Fernandez Motorsport will continue to run an XY Falcon for Doug Westwood in the Touring Car Masters this season, while Fernandez has not ruled out of competing somewhere himself.

“I’d like to (compete) – I’m chasing a little bit of sponsorship but whether it comes off or not we’ll have to wait and see,” he said.

“Potentially there’s something there, but it’s getting a bit late in the day.

“I’d love to do Carrera Cup or Fujitsu. There’s nothing else that interests me outside of the main game.”