Garth Walden in the Radical SRX

Former V8 Supercars driver Garth Walden will compete at the Radical Masters Endurance Series at Spa Franchorchamps this May.

Walden was given the drive by the winner of last year’s Australian Radical Cup, allowing him to make his debut at the famous Belgian circuit.

“It was the prize for the Radical Cup last year, and the winner of the Cup donated the prize to me to go over and represent our country because I’d probably have the best shot of doing the best we can,” Walden told Speedcafe.com.au. 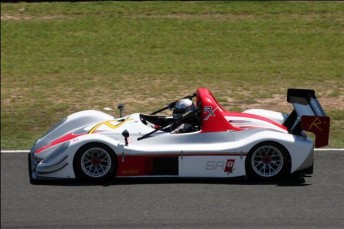 Walden will compete at Spa in a Radical

Walden will compete in two 50 minute races which includes compulsory pit stops and an optional driver change, although he is unsure if he will have a co-driver for the event.

Regardless, he is looking forward to the challenge.

“I’ve already started practicing on the Playstation – just trying to get to grips on where it all goes. The track is nearly eight kilometres long. The SR8 does the lap in a 2m16s, so it’s quite fast.

“I’ve got lots of practice on the Playstation ahead, rock up on Friday for practice and we’ll see what happens.

“I can’t wait. It’s the drive of my career, for sure. Spa is probably one of the best three tracks in the world, and to be able to go over there and drive it in a Radical will be awesome.”