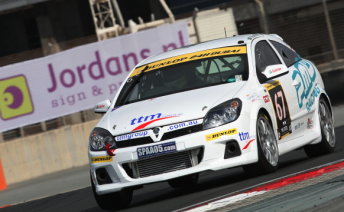 The Race Industries Astra at the Dubai 24 Hour last month

McLeod, the son of 1997 Bathurst 1000 winner Peter McLeod, took his modified Holden Astra VXR to fourth in class in January’s Dubai 24 Hour and an solid 26th overall out of 84 cars.

McLeod was partnered in the event by national-level drivers Brett Holdsworth, Jake Camilleri and Scott Nicholas.

“There’s a whole calendar for 24 Hour style racing at some fantastic tracks around the world,” McLeod told Speedcafe.com.au.

“The highlight being the Nurburgring 24 Hour, but there’s other events in eastern Europe and western Europe – races at the Hungaroring, plus a double header at Catalunya, followed a week later by the Britcar 24 Hour at the new Silverstone track.

“Now that we have the Dubai 24 Hour under our belt, plus other local enduros here in Australia, we are pretty confident that we can put together a good package for other races.

“It has whetted our appetite to do some more races. We think at the moment we’ll re-prep the car, pack up some spares, put it in a box and send it back overseas.

McLeod said that he was first interested in Dubai 24 Hour when his company – Racer Industries – started to sell brake pads to event participants.

“I was initially attracted to the event because we started selling brake pads to competitors,” he said.

“Tony Quinn won the race a few years ago with our brake pads. He came back and said what a great race it was. With our Astra, I’d done a couple of 12 Hours and the Six Hour race at Eastern Creek, and the car was proving very reliable and tough. I wanted to try something more with it, give it a real test, so we thought we should test it in Dubai.

“I spoke to a few of the other guys Jake Camilleri, Scott Nicholas and Brett Holdsworth and they were all pretty keen to go and do the race.

“We were going to just take the car that we had, but with the different rules, it was evident that we could do more stuff to the cars so I decided to build a whole new car. It weighs lighter, it has a bigger turbo charger and it has a few more enhancements, safety things, but largely, it was a standard car with stock engine and transmission. The real difference was the bigger turbo charger.

“When we arrived, we realised that the competition was a bit stiffer than I thought. The SEAT Leons that we had to race against in our class were full factory racing cars – full carbon floors, splitters and the whole works.

“We just got on with the job and ran our own race. As it panned out, we were pitted next to the other Australian entries which had bought a SEAT and they were a little bit quicker than us.

“We qualified 52nd which was respectable. Our four drivers did very well, and with about an hour to go, the Australian SEAT next to us had a problem with their radiator in the heat. We went back out on the track to race for fourth spot in the class and 26th outright.

“They were faster and closing on us, but I held them off – I was driving as hard as I could. It was quite unbelievable to be racing for position in the final moments of a 24 Hour race, especially against the other Australian team.”