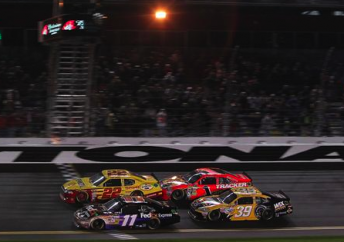 NASCAR is set to make last-minute changes to the Sprint Cup cars before this weekend’s Daytona 500 in the name of safety.

The race saw cars drafting in pairs, with drivers able to maintain bump-drafts for up to 40 laps at a time without overheating.

Concerned that cars will take flight if they spin at anything over 200mph, NASCAR issued a technical bulletin to teams after the Bud Shootout, instructing that they will restrict the cars’ cooling systems for Thursday’s Gatorade Duels.

The changes include a smaller grill opening and reduced cooling hose diameters, in order to limit the amount of consecutive metres that bump-drafting can occur.

“I think we can agree, for both the competitors and NASCAR, that 206 was probably a little bit to the extreme side, so we’ll do what we can do to probably cushion that, some.”

If the changes do not provide a suitable reduction in speed during the Duels, it is understood that NASCAR will reduce the size of the mandated restrictor-plate in time for Sunday’s 500.

The increased bump drafting in the Shootout have left many questioning engine reliability ahead of the 500, due to the combination of increased revs and engine temperatures.

The last-minute cooling system changes will only add to the intrigue heading into NASCAR’s biggest race of the year.