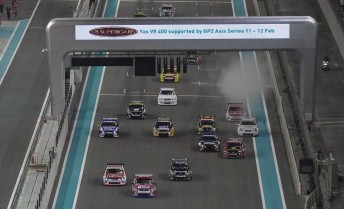 The V8 Supercars at the Yas Marina Circuit last weekend

The International V8 Supercars Championship will not compete in Europe in the near future.

As part of its new FIA ‘international’ status, V8 Supercars has agreed not to send the world’s leading touring car series anywhere west of Turkey.

Instead of considering offers from European tracks, Executive Chairman Tony Cochrane says that he wants to see the series race add another race to its opening event trek to the Middle Eastern.

Speedcafe understands that Qatar’s Losail circuit, or India’s new Formula One facility at the Jaypee Group Circuit are the leading contenders for a second event.

It is also expected that Singapore will join the series in the future, possibly as early as 2012.

Cochrane says that while there are plans to expand to more overseas races, Europe is out of the equation.

“Under the FIA ruling, we’ve agreed not to go anywhere west of longitude 30, which basically is Turkey,” he told Speedcafe.com.au.

“There’s more than enough motorsport in Europe. It doesn’t need any more motorsport. There’s big chunks of the world where motorsport is developing and we want to play a huge say in how that develops and be a really important part of those emerging markets.”

Cochrane confirmed that two events in the Middle East, or a region close by, is on the cards.

“If we’re going to come this far (to Abu Dhabi), it would be good to twin it with somewhere,” Cochrane said.

“We don’t have to do it, but it just seems a smart way of going. I hope by May we can make an announcement.

“I’m not going to get into the favourites game on which track we could go to. There’s a number of people that we are talking to. Certainly Qatar has a magnificent circuit, floodlit, really spectacular venue and a good fit for our category.

“There’s no question that Qatar is up there is our favourities, but we are speaking to other people in this region, and we’re looking in Asia as well.”