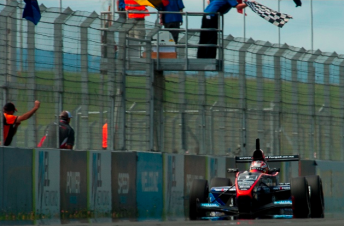 The 16-year-old saw off a mid-race challenge from fellow Kiwi Nick Cassidy to become the youngest ever New Zeland Grand Prix winner.

Along with a pair of second places in the opening two races at Manfield, Evans has now wrapped up the TRS International Trophy, and heads to the final round of the Toyota Racing Series with a commanding 210 point lead over Pye.

In Race 1 at Manfield, Kvyat took his Red Bull entry to the Dan Higgins Trophy.

Starting from pole position, the Russian beat Evans to the first corner and held the lead for the duration. Pye was third from German Mario Farnbacher and Australian Nick Foster.

A trio of quick Kiwis struck trouble in Race 1, with Nick Cassidy suffering a spin, Earl Bamber failing to leave the grid with electrical problems, and Jamie McNee forced to start from pit lane after similar issues.

Ivan Lukashevich made it two Russian winners from two starts in the reverse top-six grid Race 2.

Like Evans in the afternoon’s Grand Prix, Lukashevich led the entire race despite a Safety Car intervention tightening up the field.

Evans passed Kvyat for second after the restart, while Pye and Josh Hill rounded out the top five by the flag.