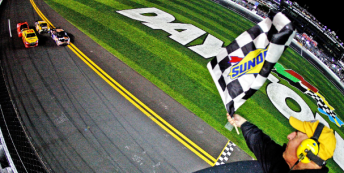 Kurt Busch has taken victory in the 2011 Budweiser Shootout – his first race in Shell-Penzoil colours.

The #22 Penske Dodge driver was awarded the win after Denny Hamlin was disqualified for crossing the ‘out of bounds’ yellow line at the apron of the track on the way to the chequered flag.

Hamlin had been attempting a ‘sling-shot’ passing move on race leader Ryan Newman when he was forced below the line. The #11 FedEx Toyota was eventually classified 12th.

Jimmie Johnson’s chances were also damaged in the incident. The five-time defending champion ended the race fourth, ahead of Greg Biffle.