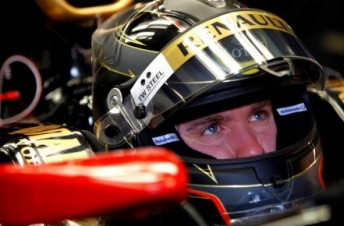 Nick Heidfeld has all but secured himself a race seat with Lotus Renault GP after setting the fastest time on Day 3 of the Jerez test.

The 33 year old had his first run in the R31 at the Spanish circuit, after the team’s second driver Vitaly Petrov completed the first two days of running.

Team principal Eric Boullier stated earlier in the week that the other two contenders for the injured Robert Kubica’s seat, Vitantonio Liuzzi and Pedro de la Rosa, would not get a run in the car if the team is suitably impressed by Heidfeld in Jerez.

Conveniently, the team sent Heidfeld out on soft compound tyres in the morning, where the German set a 1:20.361s lap that would remain fastest for the duration of the day.

Having completed 86 laps, Heidfeld commented that he enjoyed the day.

“It was fun driving the car, although it obviously takes time to get used to things when it’s your first time in a car and working with a new team,” he said.

“We had a good day, without too many problems, and luckily all the changes we made to the car went in the right direction and improved things, so I was able to push harder and harder.

“In terms of the lap times, it’s very difficult for me to compare with the other teams because we don’t know the fuel levels or what the others were doing.

“My first impressions of the car were positive, although there are always areas where you can improve.”

Second fastest was Fernando Alonso in the Ferrari – the Spaniard completing 131 laps after another afternoon of impressive long runs.

Having gone fastest on Day 2, Michael Schumacher was an encouraging third in the Mercedes, but complained that red flags had hindered the team’s testing schedule.

Lewis Hamilton and McLaren completed just 36 laps for the day after losing time with reliability issues, ending up fifth fastest.

Heikki Kovalinen’s Lotus was just 1.4s slower than Heidfeld in ninth, with a reliable run leaving the Finn confident after dramas earlier in the week.

Rubens Barrichello struggled with KERS issues to be ninth, ahead of Paul di Resta, who had his first run in Force India’s VJM04.

Formula One rookie Jerome D’Ambrosio rounded out the field in the Virgin – more than 2.5s away from di Resta.

The Jerez test wraps up tomorrow.

See below for the times from Day 3