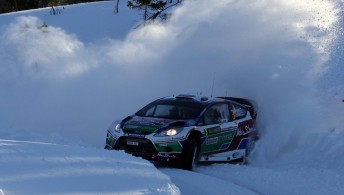 The World Rally Championship season-opener in Sweden is set for a thrilling final day, with Mikko Hirvonen, Mads Ostberg, Petter Solberg, Jari-Matti Latvala and Sebastien Ogier all separated by less than 16 seconds after Day 2.

Hirvonen turned a 14.8s deficit to Ostberg into a 7.4s lead on the penultimate day, with the Stobart Ford driver having been disadvantaged by running first on the road in the morning.

All of the leading contenders faced difficult road conditions in the afternoon’s repeat passes, with Hirvonen suffering a big spin on Special Stage 13.

The Finn also expressed concern that opening the road tomorrow may rule him out of contention.

“Maybe I don’t have a chance but you never know,” said the rally leader of his Day 3 chances.

“All I can do is go flat-out. It’s been so difficult today because all those drivers running after us on the national rally are making the line in completely the wrong place but they won’t be there tomorrow so maybe we can do it. I will just push as hard as I can.”

Petter Solberg sits third, just 1.5s behind Ogier, having driven strategically in the final stage of the day to ensure a favourable road position for tomorrow.

Like his team-mate Hirvonen, Jari-Matti Latvala also suffered a spin to end up fourth, five seconds ahead of Citroen pilot Sebastien Ogier.

Sebastien Loeb rounds out the top six, 82s adrift of Hirvonen, after surviving a scary moment during the afternoon.

The seven-time reigning champion narrowly avoided a head-on collision with Patrik Sandell Skoda Fabia. The Super 2000 contender had spun and was trying to turn his car around at the time.

“There was a lot of movement coming in this place from the spectators,” Loeb, who won the stage, recalled.

“I saw one person telling me to slow right down, so I did and then I crossed Sandell.

“It was a surprise, but I knew something was coming from the people moving.”

See below for the rally order after Day 2