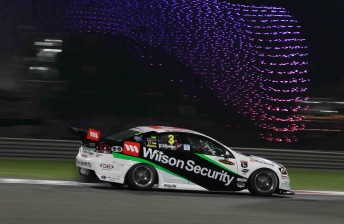 Tony D’Alberto has received a 25 point penalty for his part in Race 2’s opening lap crash at the Yas Marina Circuit.

The Wilson Security Racing driver made one his lightening trademark starts and tried to pass even more cars at the top of the corkscrew before collecting the back of Tim Slade’s Lucky 7 Racing Falcon.

Slade’s car was left stricken the middle of the track before being collected by Garth Tander (Toll Holden Racing Team Commodore VE). All three drivers were out of the race.

D’Alberto admitted to the error and was penalised 25 points, leaving him 26th in the points battle.

TeamVodafone’s championship leader Jamie Whincup also caught the eye of the stewards. The #88 car is alleged to have crossed the pit
exit blend line on his out-lap – before the race had started.

The matter will be finalised in Adelaide where stewards will look at more evidence.

Other pit lane penalties imposed during the thrilling Race 2 were for Steve Owen after contact with Karl Reindler, while Craig Lowndes was given a drive-through penalty for his hard collision with Russell Ingall.

It was also a horror race for Ford Performance Racing. Paul Dumbrell served a drive-through for disobeying the red light at pit exit. His team-mates Mark Winterbottom and Will Davison were also in strife. Winterbottom crossed the blend line at pit entry, and Davison was penalised for a unsafe re-entry to track, causing a crash with Lee Holdsworth.

The incident bent the steering of Holdsworth’s Fujitsu Racing car, putting him out of contention.