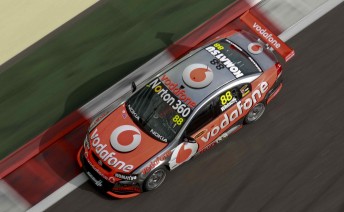 Jamie Whincup has continued his stellar start to the 2011 V8 Supercars Championship, taking pole position for Race 2 at the Yas Marina Circuit today.

The TeamVodafone driver, who won last night’s opening race of the season, topped the times ahead of his team-mate Craig Lowndes.

The Vodafone pair started one-two for the first race of the season, but today’s race will see them line-up in reverse order.

“That was one of my better laps. I’m really happy with that,” Whincup said.