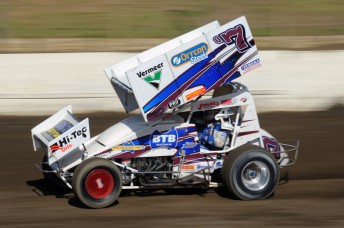 A win in the preliminary feature at Bunbury City Speedway last night has kept Robbie Farr narrowly ahead in his quest to claim his maiden World Series Sprintcars crown.

Farr led home championship arch-rivals David Murcott and Steven Lines in an incident filled event to maintain a three point buffer at the top of the points standings.

Ryan Farrell, who started on the front row with Farr withdrew with front-end damage early, David Priolo flipped and deep in the race after there was contact between Danny Reidy (who started from fourth) and American Jason Johnson (who started from third), causing a chain reaction.

The drivers who turned left to avoid contact but were still caught up in the carnage and included Kerry Madsen, Shaun Bradford, Max Dumesny and Ian Madsen.

But one man who stayed clear of all the drama was Farr.

“This track just continues to be good to me, I love this place and the town,” said Farr.

“Hopefully we will continue that tomorrow night.”

While it is all about gathering points the Orrcon Steel-backed East Coast Pipleine driver admitted he wouldn’t be going easy over the final four nights of racing.

“It’s a constant battle in your head, you know the consequences if you come unstuck this deep into the championship,” said Farr.

“But at the end of the day if we tear up gear while trying to win this thing we can still hold our heads high.”

Round 14 will be concluded in Bunbury tonight before the series moves to Manjimup next Wednesday and then the Perth Motorplex next Friday and Saturday night.