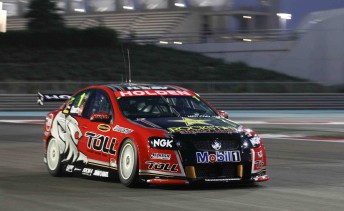 James Courtney’s title defence has begun in disastrous circumstances at the Yas Marina Circuit in Abu Dhabi this evening.

The #1 Toll Holden Racing Team driver collided with Jason Bargwanna on the first lap, damaging his Commodore. The steering broke as a result of the clash a few laps later.

He eventually finished 26th, four laps down, with the only saving grace being when he set the second fastest lap time on lap 39.

Courtney says that his low qualifying position of 20th was partly to blame for his horror result.

“We didn’t get it together in qualifying today, which put us back in the mix where you just don’t want to be – when you’re back there things go wrong, and they did!” he said.

“We damaged the front of the car and broke the steering and had to pit. We lost a heap of time and from then on we were wounded. This track doesn’t lend itself to fighting back from there.

“It’s not the way we wanted to start the season, but after the incident I had a good amount of time in the car, we were able to make some changes mid-race, and we set the second fastest lap of the race only four laps from home.

“It’s only the first race of the year, so we get to fight another day tomorrow.”