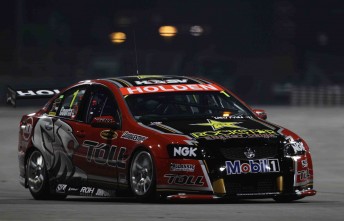 James Courtney has made a stunning comeback at the Yas Marina Circuit, winning Race 2 of the V8 Supercars Championship in Abu Dhabi.

The new Toll Holden Racing Team recruit used a superior fuel and race strategy in the safety car-plagued event to secure his first win for the factory Holden team in one of the most enthralling races in recent memory.

After being penalised 50 points for a collision with Jason Bargwanna yesterday, Courtney went toe-to-toe with Team BOC’s Jason Bright in the final laps, passing and re-passing each other a number of times.

Courtney ran a risky fuel strategy, running 22-straight laps on one tank of fuel. Bright was on a similar strategy, elevating them to the front of the field while others took late fuel stops.

Pole-sitter Jamie Whincup was one of those late stoppers, recovering to finish third after a late stop for fuel.

Whincup’s Race 1 win and his podium tonight keeps him at the front of the V8 Supercars Championship table.

The race started with a bang when Tony D’Alberto (Wilson Security Racing) collided with Tim Slade (Lucky 7 Racing). Slade spun in front of the pack and was hit hard by Garth Tander (Toll HRT). All three drivers were ruled out of the race.

A lengthy Safety Car period ensued, with confusion reining due to a slow-moving Safety Car in the accident area near the exit of pit lane.

Officials are reviewing the results post-race as the red light at the end of pit lane was active and could play its part in the outcome of the race.

The next round of the V8 Supercars Championship will be held at the famous Adelaide street circuit for the Clipsal 500 on March 17-20.