V8 drivers size up in battle of bulge

V8 drivers size up in battle of bulge 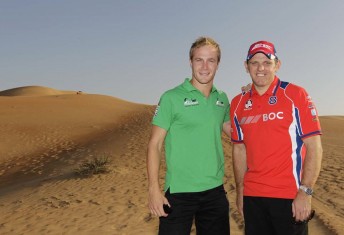 Jason Bright is the biggest loser of the V8 Supercars field, but that has nothing to do with the results of the opening practice session of the season …

The Team BOC driver has shed a sizey 7.5kg since the first round of last year’s championship dropping him to 93.5kg – the most of any V8 driver in the past 12 months.

Bright’s weight has been released, along with all of the V8 Supercars drivers, who went in for their traditional pre-season weigh-in.

Bright told Speedcafe.com.au that he’s working hard on his fitness over the summer break.

“I worked hard on that over the summer and I wanted to put everything into this season.”

Jim Beam Racing’s Steve Johnson continues his reign as V8 Supercars’ heaviest driver, clocking in at 106kg. He also remains one of the tallest in the field, alongside Shane van Gisbergen, who weigned in at 99.5kg.

In terms of the most weight gained, Karl Reindler heads the list, adding four kilograms in the past 12 months. This can be attributed to his increased gym activity.