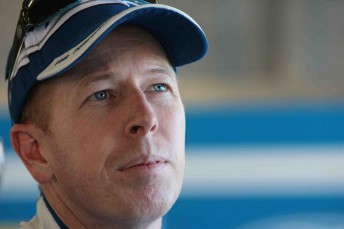 Two-time Bathurst 1000 winner Steven Richards says there will be “some strong emotions” this weekend as he watches the opening event of the 2011 V8 Supercars Championship unfold without him.

Richards’ run of 160 consecutive Championship starts, stretching back to 1999, is set to be broken after the 38-year-old was replaced at Ford Performance Racing by Will Davison.

Richards made his debut for Garry Rogers Motorsport in 1996, and has subsequently driven for Gibson Motorsport, Ford Tickford Racing, Perkins Engineering and Ford Performance Racing – taking six round wins and nine top 10 championship finishes along the way.

While Richards has stated that he intends to be back in the series full-time in 2012, watching Yas Marina’s opening races from the couch may prove to be a painful experience.

“Obviously I’d love to be there with all of the other guys,” Richards told Speedcafe.com.au.

“To be honest in the lead-up I’ve been so busy sorting out my own stuff for this year that I haven’t really had time to be envious.

“But I’m sure once qualifying and the races come around there will be some strong emotions there, no doubt.

“I’ll be keeping a close eye on what’s going on via the TV – I’ll be the ultimate backseat driver in a sense.

“I’m a big believer in live being the only way to watch sport, so I’ll be staying up for it.”

Having assessed the times from Friday practice, Richards nominates Stone Brothers Racing as the potential surprise packet this weekend.

“It’s always hard to pick people’s true pace from practice, particularly in Abu Dhabi because it really depends on when you set your time,” he said.

“I’m sure there are some guys who will be a lot more competitive than they looked in Practice 4.

“But I’ve got to say, I’m impressed with SBR. To have three cars in the top 10 indicates that it’s a reasonable form guide to their pace.

“The GRM guys were quick as well. Abu Dhabi isn’t the sort of circuit that has suited those cars in the past, so to both be in the top 10 looks promising for them.

“Garth Tander had a mechanical issue which kept him down the order, but I’m sure he’ll bite back pretty hard when it counts.”

Richards expects to have his own 2011 racing plans sorted within the next two weeks.

Speedcafe.com.au understands that Richards is highly likely to return to FPR for the Phillip Island and Bathurst endurance races, and is currently working on deals to race in either Carrera Cup or the Touring Car Masters.

“It’s very important that I get miles in cars of some description before heading to Phillip Island,” said Richards.

“The last thing you want to do is head into the biggest two races of the year underdone.”