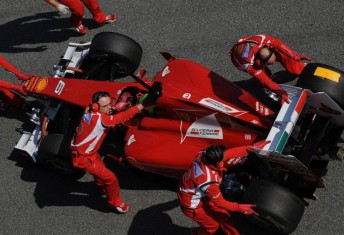 Felipe Massa has continued Ferrari’s strong 2011 testing form on the first day of running at Jerez, topping the time sheets by nearly 0.8s.

Australians Mark Webber and Daniel Riccardo were third and fourth fastest respectively, with the Toro Rosso test driver completing half a day for the ‘junior team’ before regular driver Jaime Algeursuari took over.

McLaren, Force India and Virgin all debuted their new cars in Jerez, having run interim models last week in Valencia.

Hamilton declared himself happy with the MP4-26 after ending the day fifth fastest having completed a series of short runs.

The McLaren did not run the KERS and adjustable rear wing systems simultaneously during the day.

The new wings have proven troublesome for some teams, with Mercedes’ example again not working, and Williams losing nearly the whole day’s running due to problems with their system.

Rosberg managed just ninth fastest in the W02, with gearbox and sensor issues stopping the German during the day.

Jarno Trulli was tenth, and left to lament unreliability in the car’s rear end – with persistent gearbox problems preventing any meaningful running for the Lotus.

Sutil also struck trouble with the Force India. The German completed just 28 laps after discovering that the blast shields on the floor of the new VJM04 were not strong enough to cope with on-track forces.

Vitaly Petrov had a quiet day of running to be seventh fastest, having completed installation laps while Massa and Perez set their quick times in the morning.

The fate of the second Renault seat is still grabbing plenty of attention, with team principal Eric Boullier stating that Nick Heidfeld will get the job of replacing the injured Robert Kubica if he meets the team’s targets at Jerez.

See below for the fastest times from Day 1