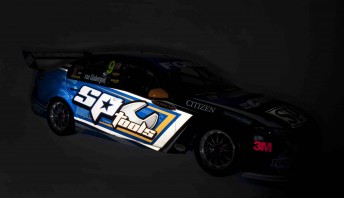 Stone Brothers Racing’s Shane van Gisbergen will standout in the crowd this weekend, thanks to a stunning sticker scheme on the side of his #9 SP Tools Racing Ford Falcon.

Team sponsor 3M has created a new retro-reflective sticker for van Gisbergen’s car which “catches ambient light and magnifies it, creating a stunning ‘glow in the dark’’ according to the team.

The stickers will be seen on the side of the car, plus the SP Tools branding on the bonnet.

The car’s new look will get its first run, appropriately, under lights at the the Yas Marina Circuit this weekend.

Alistair Rathbone from 3M Australia said that the concept is something they have been working on to enhance the brand images on the side of large trucks all over Australia for the last two years.

“When I was watching the racing under lights last year I had to ask myself ‘what if we applied the same film to our 3M sponsored SBR car and watch it light up when the cameras shone on it for the TV?” he asked.

“The number nine car will most certainly stand out from the pack – after all, isn’t that what the sponsors want?”

CLICK HERE for more with Shane van Gisbergen ahead of this weekend’s opening round of the V8 Supercars Championship.