How Frosty’s career could have been different

How Frosty’s career could have been different 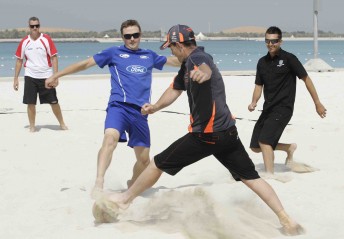 Leading V8 Supercars driver Mark Winterbotton is glad he pursued a career in motor racing as his life could have been much different, if he’d swapped round, black wheels for round balls.

In his formative years, the #5 Orrcon Steel Ford Performance Racing Falcon driver had a choice of continuing a representative soccer position, or concentrating on racing go-karts.

‘Frosty’ chose karting, and has gone on to become one of the stars of the V8 Supercars Championship and is considered by many as one of the favourites for this year’s V8 title.

After proving his all-round sporting ability in Abu Dhabi’s pre-race media opportunity, Winterbottom says that he doesn’t not regret his decision one bit …

“I played soccer for about 10 yerars when I was young, so it was either that or karting. I chose karting,” he told Speedcafe.com.au.

“I played representative soccer in Sydney when I was 11. I chose go-karting, and that was the right choice. Karting was more fun …”

For more with Winterbottom and his beach soccer skills, check out Speedcafe’s exclusive video below …