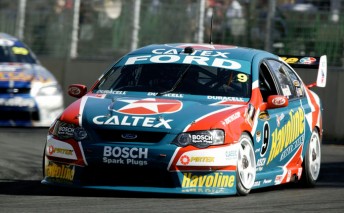 Ingall raced the car for two seasons, finishing second in the 2004 Sandown 500 and Championship Series.

“It’s always good to have a new car. We’ll be testing it for the first time in a couple of weeks – I can’t wait to get in it.

“We thought it was important to put Michael in the known product. We won races in the ex-Larkham car last year, and it’s got a really good Stone Brothers engine onboard.

“Mark has done a bit of racing with us now, so it’ll be a good three-car team environment for Michael to work in.”

With series organisers expecting 20 car fields this season, Wyhoon is looking forward to increased competition in the category.

“I reckon the series is going to be good this year, it’s going to be competitive and if we can get close to 20 cars it’ll be terrific,” he said.

“I raced in four of the five rounds last year, and while we didn’t have a very big field in the opening two rounds, it grew very quickly after that.”

The 2011 Kumho Tyres V8 Touring Car Series kicks off with the Shannons Nationals at Wakefield Park on March 1-3. Next Story How Frosty's career could have been different