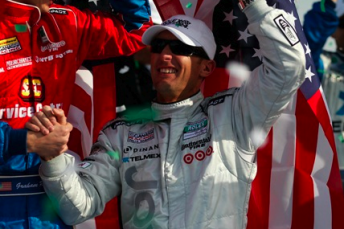 The 31-year-old American starred in Chip Ganassi’s GrandAm Riley-BMW at Daytona – recovering from a drive-through penalty to get the #01 car back into contention in the closing stages.

Hand also holds down a full-time drive with BMW, competing in the American Le Mans Series as part of the company’s M3 GT2 program.

Speaking to speedtv.com, Hand explained that, like A.J. Foyt and Mario Andretti before him, driving in multiple classes during a season is his ultimate dream. 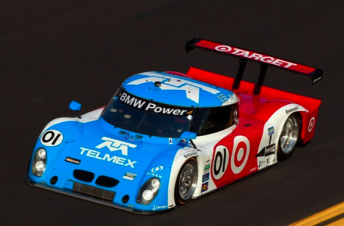 “IndyCar, (NASCAR Sprint) Cup, V8 Supercars… I really want to drive them all and be the best I can be at it.

“I have a wonderful home with BMW in sports cars, and that will always be my number one focus.

“But, like I learned from the legends and heroes I grew up worshipping, you can have a full-time focus on one series and still go outside and do big events and win them.

“I want to win for somebody at the Indy 500, and as a NASCAR road course ‘ringer’ in Cup or Nationwide.

“I want to go Down Under and race Bathurst and Surfers Paradise.

“Those are my big goals outside of winning races and championships for BMW.”

Hand’s ALMS commitments mean he will not be available for this year’s Phillip Island’s L&H 500, but will be free to contest either the Bathurst 1000 or Gold Coast 600.

Hand finished seventh in the GT2 class of the 2010 ALMS. The class was won by Patrick Long, who impressed with Garry Rogers Motorsport at Surfers Paradise last year.

While Hand’s recent Daytona victory is a career highlight, many best remember the American for his incredible ALMS crash below