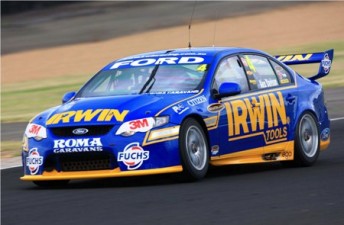 Alex Davison will arrive at the Yas Marina circuit tomorrow morning brimming with confidence following strong off-season car development and a positive test at Eastern Creek a fortnight ago.

IRWIN Racing showed its potential at the Sydney Telstra 500 last December when it qualified for Saturday’s top-10 shootout and comfortably ran at the front of the field, challenging the series leaders during the rain affected race.

Since then the team has had a staffing shuffle, returning the experienced David Stuart back to full-time Team Manager duties, it has brought in highly regarded race engineer Daniel Kroehn to work alongside Davison and has enjoyed a very successful pre-season test.

Davison enjoyed racing in Abu Dhabi last year; he enjoyed the country, enjoyed the people and is a big fan of the high-grip billion dollar desert race track.

The Queensland based driver started the 2010 season strongly, qualifying seventh and finishing ninth in the Saturday race in Abu Dhabi and is feeling very confident ahead of this weekend’s twin 200 kilometre races.

“IRWIN Racing had a really good test at Eastern Creek Raceway, the car was running well and I was happy with our competitiveness.

“There is some time to come; there are some easy improvements that we have up our sleeve going to Abu Dhabi. We also found some gains back at the workshop that we didn’t see at the test.”

Davison’s confidence is so high he expects to be in the top 10 in qualifying for both races, something the team struggled to achieve regularly in 2010, and believes he can race near the pointy end of the field.

“Our minimum requirement for qualifying this weekend is the top 10 in both races,” said Davison.

“It would be great to get a podium.

“If we left in the top five it would be really good, if it was the top 10 it is a solid start and gives us something to build on.

“Anything less and I will be disappointed, that’s for sure.”

The V8 Supercars hit the track for the first session of the season on Thursday at 9.20pm, Australian EDST.