Mark Winterbottom has begun his 2011 racing season in the best possible manner – winning a promotional kart race between V8 Supercars and GP2 Asia drivers ahead of this weekend’s action at the Yas Marina circuit.

Frenchman Bianchi, who is also a Formula One test driver for Scuderia Ferrari, will start as one of the favourites for this weekend’s GP2 Asia support races. 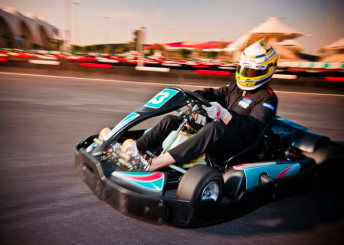 Winterbottom on his way to victory

The V8 Supercars will take to the 4.7km Yas Marina track on Thursday for practice. Qualifying and Race 1 of the Championship will be held on Friday with Race 2 to conclude the event on Saturday.

Lotus Renault Formula One test drivers Romain Grosjean and Fairuz Fauzy are also in the field, driving for DAMS and Super Nova respectively.