Formula One minnow the Hispania Racing Team has revealed images of its all-new 2011 car.

The F111 has been designed by technical director Geoff Willis and chief designer Paul White, after the team subcontracted the design and build of its first chassis last season to Italian firm Dallara.

While the new livery is a striking departure from last season’s grey effort, Indian firm Tata is the only sponsor visible on the car, with ‘your logo here’ and ‘this could be you’ branding prominent.

The team will continue to run Cosworth engines this season, while upgrading to a Williams rear-end package.

Team principal Collin Kolles said the image of the new car confirms the squad’s commitment for Formula One. 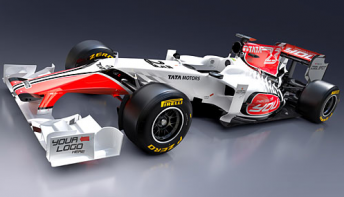 “We have made a big improvement for starting our second season in Formula 1 and what you see in our new car confirms Hispania Racing’s commitment to F1.”

Having run its 2010 car in Valencia last week, Hispania will miss the second test in Jerez, choosing instead to join Pirelli for promotional activities at Monza.

The F111 is scheduled to make its debut at the final official test of the pre-season in Bahrain.

Indian Narain Karthikeyan remains the only confirmed driver at the team.