Tim Blanchard is aiming for title glory this season

The 23-year-old joins the 2009 title winning squad after a rookie season in which he won a round and the Mike Kable Rookie of the Year award.

Blanchard will compete with one of the team’s two ex-Ford Performance Racing chassis/engine packages, while Tweedie’s MWM-built car will run a KRE engine – as campaigned by TeamVodafone in 2009.

According to Blanchard, MWM’s strong customer relationship with FPR was a definite incentive to move teams.

“There are a few different reasons why we went with Matt this year,” Blanchard told Speedcafe.com.au. 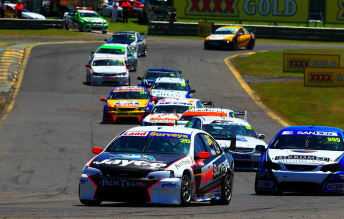 “Being linked with FPR is pretty important – we saw that as a good opportunity, and obviously there were a few commercial reasons as well.

“MWR and Sonic both provide very good cars, so it just came down to the commercial reasons.

“Last year was a learning year for us, and I think that we met most of our objectives for the year.

“So this year is about going one step further and trying to win a few more races and win the championship.”

“I’m really looking forward to it,” said Blanchard of the involvement of the main series teams.

“Last year when people like Paul Morris and Cameron McConville came and did some rounds a lot of people jumped up and down saying ‘it’s supposed to be a Development Series for developing young drivers.’

“But I sort of see it in the opposite way. The guys in the development series have the goal to move to the main series, and if you can’t beat those guys then you don’t deserve a main series seat.

“So to be able to go up against those guys on a regular basis shows us where we’re at, and if you can beat them, you can then put your hand-up for a main series seat with a bit behind you.

“Everybody has only got two arms and two legs, so at the end of the day it’s the same for everyone.”