The V8 Supercars have arrived in Abu Dhabi

The V8 Supercars have arrived at the Yas Marina Circuit ahead of this weekend’s opening round of the Championship in Abu Dhabi.

All 28 cars arrived safely aboard their two specially-chartered Boeing 747 Jumbo air freighter from both Melbourne and Brisbane respectively.

The Bottle-O Racing’s Paul Dumbrell, who finished seventh in 12th in last year’s two races at Abu Dhabi, says that the Yas Marina Circuit offers teams a host of challenges.

“Yas Marina is an interesting challenge for teams and drivers as the circuit conditions are constantly changing so the first event for the year is going to be interesting,” he said.

Dumbrell also says that he is fit and ready to improve on his career-best ninth overall that he scored in the 2010 championship. 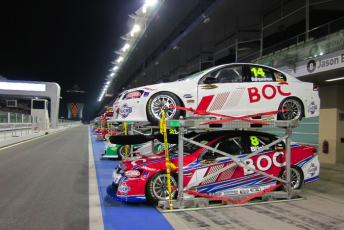 The BOC Commodores - with and without livery!

“I really found a groove with the car at the end of last year and I am keen to carry that speed into this season as it was a great feeling to be battling for race wins and podiums,” he said.

“My fitness is improving and I’ve worked really hard since (the last round of 2010) Homebush so that should help in the hot conditions.”

The V8 Supercars will take to the 4.7km Yas Marina track on Thursday for practice. Qualifying and Race 1 of the Championship will be held on Friday with Race 2 to conclude the event on Saturday.