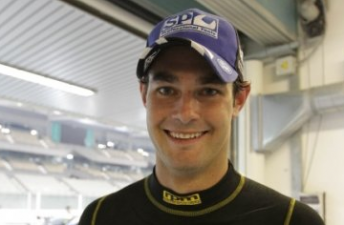 Having taken his first podium finish at the venue in 2010, the young charger is gunning for his first victory this season.

With the Kiwi already in Abu Dhabi, Speedcafe.com.au’s Grant Rowley spoke with him about the weekend ahead.

SPEEDCAFE: Fifty starts for a 21-year-old is a pretty cool achievement …

SHANE VAN GISBERGEN: Yeah, it’s gone quite quick, but I’m not thinking about that too much. I’m more looking forward to getting out there this weekend.

We had a pretty good test day, very positive, so I can’t wait to get out on the track for first practice and get into it.

We had a good run here last year, had good speed and got a podium in the second race – my first podium – so I can’t wait.

SPEEDCAFE: The track must have happy memories for you, because not only did you score your first podium there last year but you’re also the lap record holder. Is this the best track for you to launch your season?

SvG: Definitely, but this year, we have the soft tyre to work with. We were one of many guys who didn’t have a good set of soft tyres to use at Eastern Creek. Our car was quick on the hards, but we didn’t have anything decent to set lap times with.

We need to hit the ground running this weekend. There wasn’t much wear with the hard tyres last year, so we’ll see how the softs hold up.

SvG: I don’t think it will be like a Darwin type deal where you have to look after it. Last year, the hards didn’t really wear out, so you could push 100 percent of the time.

Obviously the softs will wear out faster than the hards, but it’s not a concern of ours. The track is very easy on the tyres, so it might be OK.

SPEEDCAFE: Another thing on racking up your 50th start. Do you look at your records and achievements much?

SvG: I don’t know. Fifty starts is OK, but the way I look at it is that I’ve made 49 starts and I haven’t had a win. Hopefully that can change this year.

I don’t really look at the records too much. Maybe later on in life when I get a bit older, but not at the moment. I just take it race by race at this stage.

SPEEDCAFE: You finished sixth in last year’s championship – your best ever finish, plus a bag of podiums. It was a good achievement. What’s the next step for you?

SvG: We’ve just got to build on what we achieved last year and keep improving. Every year we’ve gone better and been further up the championship.

There are still a few things that we need to improve with the car and myself, but it’s all time and experience.

We can’t make the same mistakes that we’ve made in the past if we want to be vying for the top couple of spots.

SPEEDCAFE: What’s your take on the Yas Marina Circuit? It’s a little different to Winton and Queensland Raceway…

SvG: For sure, it’s completely different to what we usually race at.

There isn’t much atmosphere, but I don’t mind the track. It presents its own little challenges. It’s quite enjoyable.

The first sector is quite open, and then it’s all 90 degree corners at the end of the lap. It makes it a bit of a challenge to set-up your car for it.

SPEEDCAFE: You’re already in the desert. What’s the vibe? How’s the weather?

SvG: It’s alright – it’s not too hot. We’ve done a few promotional things. We did a kart race earlier, it’s all a bit of fun.

SPEEDCAFE: Are you planning on doing a Ferrari World visit?

SvG: I don’t think I’m on the (V8 Supercars media) list to do that. I might just go myself.

A few of the SBR boys are going to go themselves so I might just go with those guys.