V8 Supercars on their way to Abu Dhabi

V8 Supercars on their way to Abu Dhabi 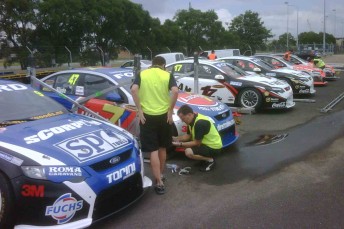 The cars queue up at Brisbane International Airport before jetting off to Abu Dhabi. (Note: The coloured in #17 on the side of Steve Johnson's Falcon ...)

All 28 V8 Supercars in this year’s Championship have taken off from Melbourne and Brisbane and are currently on their way to Abu Dhabi’s Yas Marina Circuit.

Fourteen cars were dispatched on two specially-chartered Boeing 747 Jumbo air freighter from both Melbourne and Brisbane respectively, with Victorian-based Tony D’Alberto Racing sending its Commodore VE up to take off from Queensland to even up the air lift. The flight distance between Melbourne and Abu Dhabi is 11,650km.

Some of the V8 Supercars drivers are already in the Middle East, including Team BOC’s Jason Bright.

Most of the other drivers fly out from Melbourne, Sydney and Brisbane tonight.

V8 Supercars Australia itself is sending a total of 416 people to the event at the stunning Yas Marina facility. That group includes V8 staff, officials and media.

Each two-car V8 Supercars team is permitted to take three aircraft boxes containing 13.5 tonnes of spare parts and support equipment to for the event.

The first practice session of the 2011 V8 Supercars Championship will be held at the track on Thursday.

CLICK HERE for Chris Jewell’s look at ‘Who’s hot and who’s not’ for the this year’s V8 Championship in his column Speed Talk.