Todd and Rick to run ‘Queensland’ on JDR cars

Todd and Rick to run ‘Queensland’ on JDR cars 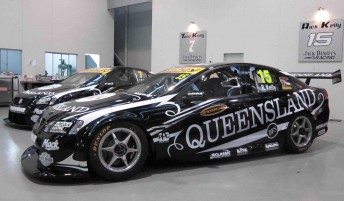 Todd and Rick Kelly will display special ‘Queensland’ signage on the bonnets, doors and rear bars of its Commodore VE IIs during the opening round of the Yas V8 400 in Abu Dhabi.

Due to strict alcohol advertising restrictions, the Jack Daniel’s Racing team is prohibited from branding its cars with the famous whisky signage. The team usually features ‘Jack Lives Here,’ but has decided to raise further awareness for the thousands of Queenslanders who have been affected by the recent floods in South East Queensland and subsequent Cyclone Yasi in the northern part of the state.

Victorian Rick Kelly said that he was happy to represent Queensland in Abu Dhabi this weekend after the events of the past few weeks. 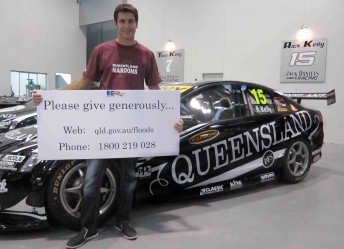 Rick Kelly is urging people to donate to the Premier's Flood Appeal (Not sure how many New South Welshman will donate with that shirt though, Rick!)

“The crazy weather of the past few weeks has affected people right around Australia, but nowhere as significantly as up in Queensland,” said the #15 driver.

“This weekend we will be taking the plight of Queenslanders to the world, not only encouraging our Australian fans to dig deep and donate, but also spreading the word in the Middle East and right around the world via the TV telecast of this weekend’s race.”

Queensland Premier Anna Bligh extended her thanks to the Bathurst winning brothers.

“The support of Rick and Todd Kelly and the Jack Daniel’s team is testimony to the support of the V8 Supercars fraternity to Queensland’s current situation,” said Bligh.

“Their commitment will bring enormous focus to the plight of those affected by the floods and cyclone through national and international TV and extended media.

“This is testimony to the fantastic support we have received across the board from Australians of all walks of life.

“We understand that branding on the side of a V8 Supercar costs a lot of money and we are appreciative of the Queensland branding provided by Jack Daniel’s Racing.

“We look forward to seeing Rick and Todd and the entire V8 Supercars clan in Townsville and then the Gold Coast later in the year.”

Rick Kelly said that he was happy to help the Premier’s Relief Fund.

“We get to see a couple times a year when we race in Townsville and the Gold Coast and she is a friend of the entire V8 Supercars community.

“Queenslanders are a tough bunch. We are happy to help them in this tough time – and I hope some of their well-known sporting success rubs off on us in Abu Dhabi this weekend.”

Jack Daniel’s Racing’s support for Queensland on the race track this weekend follows significant off-track support by Brown-Forman, owners of the Jack Daniel’s brand, who donated US$100,000 to the cause in January.

Donations are continuing to be accepted at the Premier’s Flood Appeal at http://www.qld.gov.au/floods