Tim Blanchard is close to securing his future in the Fujitsu V8 Supercars Series.

The 23-year-old Victorian looks set to compete with Matthew White Motorsport in the 2011 Fujitsu Series.

Blanchard and his management could not comment on the deal, only saying that they are hopeful of locking in his future this week.

In his debut V8 season last year, Blanchard finished second overall, picking up his maiden race and round win at the Townsville street track in July. 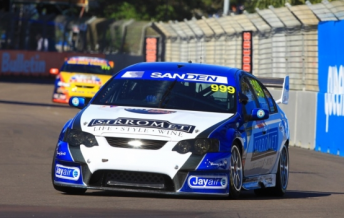 His likely switch to the MWM team, the 2009 champion team (Jonathon Webb), will keep him racing a Ford Falcon.

Blanchard is a former Australian Formula Ford champion (2007). He also finished runner-up in the 2008 British Formula Ford title before heading back to Australia to complete his university studies.

Besides finishing second in the Fujitsu V8 Series last year, he also made his Championship Series debut, partnering Greg Murphy in the Paul Morris Motorsport-prepared Castrol EDGE Commodore VE at the L&H 500 at Phillip Island.

The first round of the Fujitsu V8 Series will be held at the Clipsal 500 street track on March 17-20.