No major backer for Bargwanna in Abu Dhabi

No major backer for Bargwanna in Abu Dhabi 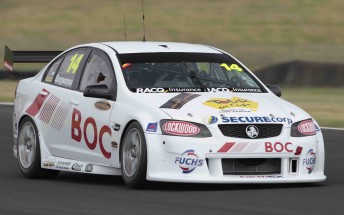 Jason Bargwanna’s Brad Jones Racing Commodore VE II will compete largely unsponsored in the first round of the V8 Supercars Championship at Abu Dhabi this weekend.

The #14 Commodore VE II will be entered under the Team BOC name, but will be seen in the same white livery that it ran in at Eastern Creek’s pre-season test.

Bargwanna was supported by Rock Energy Drinks last season at Kelly Racing and was originally intended to bring the sponsor with him to BJR in his late switch to the Albury-based team, but the business recently fell into the hands of administrators, leaving ‘Bargs’ and the team with no title backer for the start of the 2011 season.

BJR team owner Kim Jones said that it has been a difficult time for the team after the departure of major backer Trading Post, the struggles to replace it and the sudden illness of Jason Richards.

“Unfortunately, car will appear at Abu Dhabi with the same look that it had at Eastern Creek,” he told Speedcafe.com.au.

“It has been a tough road for us and we haven’t hit our mark. We haven’t given up. Everything is still trucking along, so we’ll see what happens.

“The potential for success is there. We’re probably in a better position that we’ve been before, and the test day is a good indication of that. Everything is going well, but we’ve got to get the money thing in place soon.

“The rest of the team is working well. We have good people, good car speed, good engines. There’s nothing wrong with the cars. The package is covered, but I guess I’m letting the side down myself …

“I understand that there’s circumstances that you can’t help, but we’re doing the best job we can do. For the only country-based team in the whole show, I think we punch fairly well above our mark.”

At the Eastern Creek test, ill racer Jason Richards completed a number of laps in the Jason Bright’s #8 Commodore. Jones was encouraged to see Richards return to the drivers seat, just days after his first round of chemotherapy.

“He actually looks better now than he did at Tasmania last time he drove the car,” Jones said.

“He wasn’t very well there, but he’s doing the best job he can do, and we’re all just hoping that everything will be fine.”

Jones confirmed that Richards will be Jason Bright’s team-mate in the endurance races at Phillip Island and Bathurst, if he is fit enough.

“There’s a thing in the contract that says if he is in a position to drive the car, he drives the car,” he said.

Andrew Jones (Kim’s son) is expected to be a part of the team’s endurance program in 2011, while BJR’s third entry for Karl Reindler (Fair Dinkum Sheds Racing) will again have David Wall as its co-driver. Wall will contest the 2011 Fujitsu V8 Supercars Series with Tony D’Alberto Racing.