James Courtney: We can win straight away

James Courtney: We can win straight away 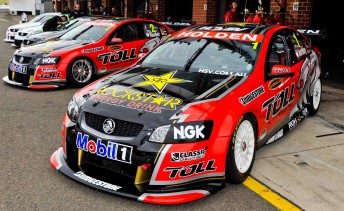 James Courtney sees no reason why the Toll Holden Racing Team can’t win races right from the get-go at this weekend’s opening event of the V8 Supercars Championship at Abu Dhabi.

Courtney, 30, admits that the Holden Commodore VE II is far different to what he has been used to in past seasons, but is confident that the factory Holden team will be competitive – if not the benchmark – at this weekend’s first event. 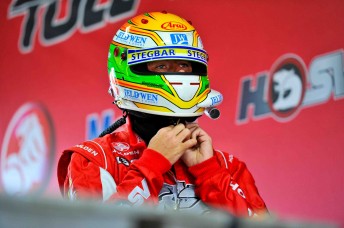 James Courtney is confident of strong results in his new team

“The Holden is different to what I’ve raced before, but we’ve had three days of pre-season testing which has gone really well,” Courtney said.

“I’ve got plenty of experience in these cars, I know the Abu Dhabi track, Scott Sinclair my engineer from last year is here with me at HRT, and Garth and I already have a great working relationship.

Tander says that Courtney’s fresh perspective on the Toll HRT Commodore, and his experience at other organisations, has already been a big benefit to the team.

“James’s fresh set of eyes and ears going through everything has identified a few key areas in the Toll HRT Commodores that we’d perhaps had even become accustomed to, and he has highlighted those and we have been able to make positive changes,” Tander said.

“We’ve done quite a bit of testing in preparation for the season and have confidence in our Abu Dhabi package, so I am quite looking forward to getting over there and getting the year started.

“Like ever year, every team in pit lane will tell you they are better prepared than ever, and a few have gone out in testing and done really well, but it’s like the AFL’s NAB Cup – it’s the premiership we’re interested in, when it starts for real that’s when it really counts.

“We’re both confident of a good result, but it’s time for the talk to finish and to get on with the racing.”

The 2011 International V8 Supercar Championship kicks off with the second annual Yas V8 400 under lights at the spectacular 4.7km Yas Marina Circuit this Thursday, 10 February.

The season begins with four 30 minute practice sessions Thursday afternoon/evening (note – Abu Dhabi is seven hours behind AEDT), and unlike 2010 where the standard series control tyre was used in Abu Dhabi, the softer sprint tyre will be used in qualifying and the races.

In Australia, one hour of practice and qualifying sessions can be seen each day (Saturday and Sunday) from 12.30am AEDT on Channel 7’s digital station 7mate.

Channel 7 will then carry Races 1 and 2 live Saturday and Sunday morning from 1.30am, each qualifying session and race then replayed from 1.30pm that afternoon (check your local guides for full details).