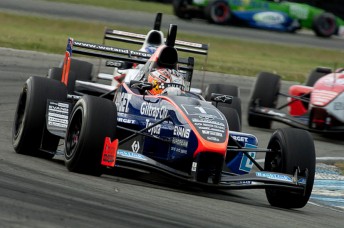 Mitch Evans is charging towards a second TRS title

Mitch Evans has closed in on his second consecutive Toyota Racing Series crown after taking another two victories at Hampton Downs at the weekend.

The 16-year-old resisted heavy challenges from Russia’s Danill Kvyat in Races 1 and 3 to extend his winning record to five victories from nine starts this season.

Cassidy took a trio of third place finishes at Hampton Downs, despite contact with Nick Foster on the second lap of Race 1.

Foster, who had taken pole position in a rain interrupted qualifying session, was knocked into the gravel trap and out of the race in the incident.

After again starting on pole for Race 3, the Australian had looked on course for his first podium finish in the class, before a spin dropped the Steeline entry to 13th.

Compatriot Scott Pye also had a trying weekend, spinning down to 11th place in Race 1 while running fifth.

The 2010 British Formula Ford Champion recovered to fourth in Race 3, and now sits third in the series standings, 238 points behind Evans.

Briton Alex Lynn remains the best of the non-Australasians in fourth, despite retiring from Race 3 at Hampton Downs after sliding into the back of Cassidy in the opening stages.

The series continues this weekend at Manfield.