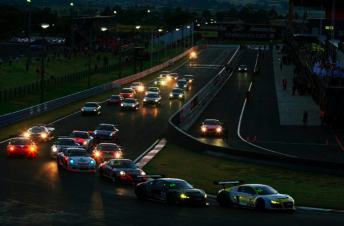 The Audis lead through the first corner

Audi’s international line-up of Darryl O’Young, Marc Basseng and Christopher Haes lead the way in the Armor All Bathurst 12 Hour as the race enters its second half.

Still on the same lap as the #8 Team Joest are the Tony Quinn/Klark Quinn/Craig Baird VIP Porsche, and the second Audi R8 entry of Craig Lowndes/Warren Luff/Mark Eddy.

While having a distinct speed advantage, the Team Joest and Team VIP entries must complete three more compulsory pitstops than their pursuers, courtesy of running 2010-spec GT3 machinery.

The first six hours of the race have seen competitors challenged by intermittent sprinkles of rain, with Luff starring in the slippery conditions during a double stint. 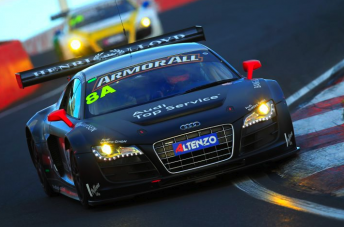 The Roger Lago/Matt Kingsley/David Russell Porsche leads Class B in fifth outright, despite a trip into the sand trap at Hell Corner in Hour 3.

The two Ferraris, crewed by Hector Lester/Luke Searle/Allan Simonsen and Peter Edwards/John Bowe/Tim Leahey are seventh and eighth respectively, with the latter entry having suffered a loose door and an electrical problem in Hour 2.

The David Reynolds/Dean Fiore/Marc Cini Porsche runs ninth after suffering steering damage in a collision with the Mal Rose/Tony Alford/Peter Leemhuis Nissan GT-R at The Dipper while running fifth. The Donut King Nissan had earlier lost time with a gearbox issue.

The Nathan Tinkler/Jeremy Gray/Steven Johnson FPV suffered delays thanks to an off at Murray’s Corner.

The race’s first casualty was Dean Grant in the Procon Developments Mosler – crashing out at the end of Conrod Straight on Lap 12.

CLICK HERE to view live streaming of the race