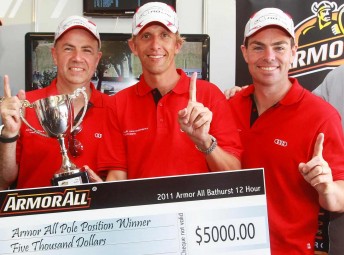 Audi has dominated qualifying ahead of tomorrow’s Armor All Bathurst 12 Hour at Mount Panorama today.

The pair of Audi Race Experience/Team Joest V10-powered R8 LMS models finished today’s unique qualifying format in first and second position, with the #7 car driven by Craig Lowndes, Mark Eddy and Warren Luff taking the top spot and the $5000 from Armor All.

The new qualifying format, a first in Australia, combined the fastest times from each of the three drivers entered in each car – creating an aggregate time to determine their qualifying position.

Lowndes, Luff and Eddy combined to set a qualifying benchmark of 6m35.3s, with V8 Supercars driver Luff setting the car’s fastest time of the session with a 2m09.63s lap early in this morning’s session. Lowndes’ time was 1.7s off Luff’s best.

The car will beginning the race’s rolling start at 6.15am tomorrow morning from first place ahead of the 25 other entries.

TeamVodafone V8 Supercars driver Lowndes said that there was more to come from the green, gold and white Audi.

“We know we have got a lot more in the car,” the five-time Bathurst 1000 champion said.

“The car is nice to drive. It’s very forgiving which is something we obviously need in tomorrow’s race.”

Lowndes said that the differing speeds of the GT cars and Productions cars made it hard to set a time.

“It is quite difficult to get a good clean lap around the mountain,” he said.

“It’s a 6.2km circuit but our closing speed is so much different to everyone else’s – especially up the top of the mountain where it is quite difficult to pass.”

But the fastest lap of the day was set by two-time 12 Hour pole-sitter Steve Owen. The VIP Petfoods V8 Supercars driver set a benchmark 2m09.1s but with his team-mates James and Theo Koundouris around 4-5s slower than him, their Porsche will line-up third on the grid.

“It’s a shame that we couldn’t get pole like we have for the past two years but that’s the way the rules are. Steve did the quickest lap of the day and did a really good job. We think we have a really good chance tomorrow. We have to stop less than the Audi’s and should be very consistent so we feel pretty confident.”

The VIP Petfoods Racing combination of Tony Quinn, Klarke Quinn and Craig Baird will go from fourth in their GT3R, with another GT3 to start fifth in the form of the Hallmarc sponsored, Marc Cini/David Reynolds/Dean Fiore entry.

In the battle for class honours, the Matt Kingsley, Roger Lago and David Russell 997 GT3 Cup Car not only scored the Class B (GT Challenge) pole position but will start from seventh outright in the process.

The duo of Porsche champions teamed with V8-ace Russell look set to be a fly in the ointment of the outright classed vehicles tomorrow.

The Nissan GTR – dubbed Godzilla thanks to its past domination of Australian Touring Car racing – returned to The Mountain as the Donut King Racing team of Tony Alford, Mal Rose and Peter Leemhuis combined to take the GT Production (Class C) pole and 12th on the starting grid.

“It’s great we were able to pull the fastest production lap together,” Robson said.

“The new thing this year is having to deal with the faster cars which puts us in the middle but it should be a good race.

“The combined times of all of us are close together,” Brame added. “I am really proud we were able to achieve something. It’s really special to do a press conference!”

Tomorrow’ Armor All Bathurst 12 Hour will begin with a rolling start at 6:15am AEST.

CLICK HERE to view the entire grid for the race.

Check out the on-board video below of Danish star Allan Simonsen in his Ferrari around Mount Panorama.