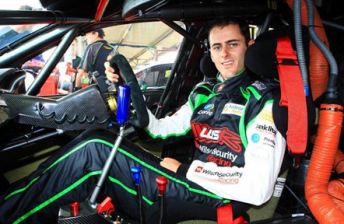 David Wall has emphasised the importance of focusing on his maiden Fujitsu V8 Supercars Series campaign this season, and avoid becoming distracted by searching for opportunities in the Championship series.

The Wilson Security-backed entry, believed to be Walkinshaw Racing’s WR001 chassis that D’Alberto will compete with in Abu Dhabi next weekend, is Wall’s first foray into the Fujitsu Series.

“We’ve tried to do Fujitsu for the last three years,” Wall told Speedcafe.com.au. 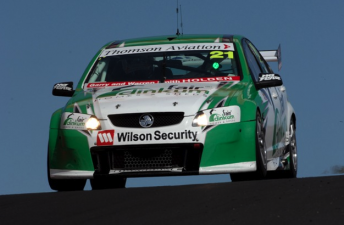 “Effectively this year it’s come together through Wilson Security and Paytner Dixon and a few other people.

“Obviously I’m very excited about it, I’ve always wanted to do it, and thought it was the best step along the way to V8 Supercars.”

Having competed in the V8 Supercars endurance events in 2009 with Paul Cruickshank Racing and last year with Brad Jones Racing, Wall believes he can run competitively in his first year in the Fujitsu Series.

“I think the first few meetings will be about me getting up to speed, and getting used to the tyre in qualifying.

“I’ve obviously run on Michelins for a lot of years and expected a lot from them, so the Dunlops are going to be very different.

“The endurance races I’ve done in 2009 and ’10, especially last year, gave me a lot of confidence.

“I feel that I can drive the cars reasonably well, and the plan is to build on that and run competitively in the field.

“The goal is definitely to get into the main series, but whether or not it happens I don’t know,” he added.

“We’ll just concentrate on what we’re doing now, and if anything comes up after that we’ll see.”

In the meantime, the 28-year-old is expected to return to the Fair Dinkum Sheds Commodore for this year’s Phillip Island and Bathurst events.

“We’re a good fit size-wise, and it’ll be really positive to have the same combination two years in a row.

“Driving for a different team each year, and different car especially is not ideal, so it’ll be nice to just jump back into the same car and same team.

“I get on really well with all the guys down there and I think it’s a good match with Karl.”

Wall is competing at Bathurst this weekend, in the Armor All-backed 12 Hour event alongside Barton Mawer and Greg Crick.

It will be Wall’s last run in the GT3 Cup S, which is expected to remain in the GT Championship with another driver aboard.