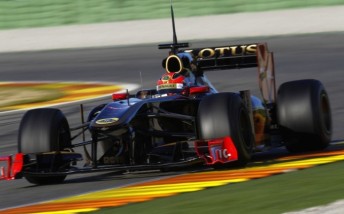 Robert Kubica in the R31

Robert Kubica has ended the three-day Valencia test with the fastest time in the ‘radical’ Lotus Renault GP entry.

The team has caused a stir in the Formula One paddock this week, as its new R31 features a unique forward-mounted exhaust system.

Kubica completed a total of 95 laps to finish the day with a best time of 1:13.144s, but was disappointed after suffering electrical problems in his morning run.

“You could split the day in two parts,” said Kubica.

“It would be difficult to call it positive because the first real run we managed only to do it at 13:30. 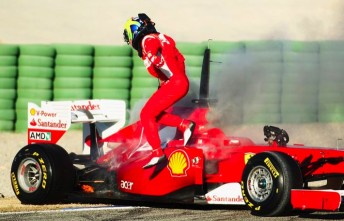 “So after we solved our problems with the car we managed to do a bit of evaluation on set-up and some tyre work.

“But because of the morning we were unable to complete our programme and we didn’t do the laps we targeted.

“But if we have to have some problems with the car or some reliability issues it’s better we have them here in Valencia than in Bahrain.”

Second fastest was Adrian Sutil in the 2010 Force India, just 0.06s behind the Pole.

Jenson Button focused on tyre testing in the 2010 McLaren, and reported that the Pirelli’s characteristics will help him improve his qualifying form this season.

Mark Webber put in a solid 105 laps in the Red Bull after his running yesterday was curtailed by a brake problem.

The Australian was less than 0.1s faster than Felipe Massa in the Ferrari.

After two days of reliable running with Fernando Alonso at the wheel, Massa suffered an oil leak and subsequent fire in the F150 after just a handful of laps.

Team Lotus completed installation laps only to cap off a difficult first test for the team. The car was not ready for Day 1, while power steering problems prohibited any meaningful laps on Days 2 and 3.

Formula One testing continues in a week’s time at Jerez.

See below for the Day 3 times from Valencia