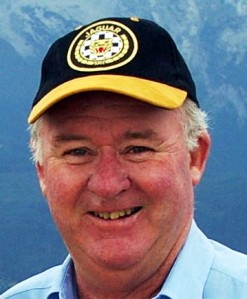 David Harding started his motorsport career in 1958. For 40 years he had key roles in the running and/or the promotion of two of Queensland’s most famous race circuits.

Lakeside, as it is affectionately known as, had its racing debut in 1961 and is about to celebrate its 50th anniversary. It was closed down in 2001, but a consortium invested in it and it re-opened in 2008.

Harding was one of the men that helped initially develop and then open Lakeside.

“The man who deserves the total credit for the planning, construction, management and birth of Lakeside, together with a band of willing helpers from the Queensland Motor Sporting Club, was Sid Sakzewski,” David Harding explained to Speedcafe.com.au

“It was his amazing drive that inspired us to help him build the circuit. We virtually built it with our own hands, and a few old graders and tractors, and the Lakeside International Raceway was born.

Harding started as Lakeside’s secretary of the club and then moved up to general manager and promoter. He started in 1958, left to work at Surfers Paradise International Raceway in 1970, only to return to Lakeside a short time later.

“I started off with the Queensland Motor Sporting Club, which had the lease of Lakeside, as the secretary of the club; I then became president,” said Harding.

“I became the club’s first full time employee as general manager and pretty much continued on in this role for the next 40 years.”

The only time Harding wasn’t at Lakeside was when he spent a couple of years working exclusively for Surfers Paradise International Raceway.

“I had a small break from Lakeside when in 1970 I was coerced by Keith Williams to run the Surfers Paradise International Raceway,” said Harding.

“Lakeside went its own way for a couple of years and then an arrangement was put together and I promoted and ran, as general manager, both circuits.

“I worked at Surfers until it closed in 1988 and managed Lakeside through until my retirement in 1998.”

Motorsport promotion and track management didn’t just come to Harding; he’d had an interest in cars and motorsport for a very long time. He used to own a “beloved’ Morris 840 which he raced in motorkhana events and even dabbled in the odd endurance race. Knowing that racing or owning race cars would never earn him a dollar, he started work as an administrator and never looked back.

Harding used to run and promote an array of racing categories at Surfers Paradise including Speedway, Drag Racing, the Tasman Series (F5000) and touring car events. The closure of the track in 1988 was a difficult day for Harding.

“Being surrounded by new housing estates, its closure was inevitable.

“The last event was a motorcycle meeting; I remember it well because someone tried to burn down the old Dunlop bridge. They failed because it eventually ended up at Lakeside, were it still stands today.”

In his role as promoter, Harding used to travel all over Europe and the United States searching for drivers that would travel to Australia to race.

“In the early days at Lakeside I was involved in the Tasman series, this was during the days of Jack Brabham and Jimmy Clark,” said Harding.

“I’d travel overseas to the UK and the US to get the Tasman series together. I put drivers under contract to the racetracks that were involved, namely Oran Park, Sandown and our own tracks.

“I was involved in putting that series together for many years.”

Lakeside Raceway is known as the ‘Home of Queensland motorsport” and like Surfers Paradise held a vast array of different racing categories, but it was the Touring cars that were not only the most popular but kept the track afloat over the course of the year. The last time V8 Supercars raced there was in 1998.

“The touring cars were always the most popular, like they are today,” said Harding.

“They were the crowd pleasers. The ATCC events helped cover the costs of one year.

“When that event was taken away from Lakeside, sadly that was the death blow. It was a slow but inevitable death.”

“The most memorable race I ever saw was an Australian Touring Car Championship race involving Peter Brock and Dick Johnson as they battled for the title at Lakeside,” said Harding.

“It was the last round and they both ran nose to tail virtually for the whole race.

“There were probably 10,000 people there, which was huge for Lakeside.

“They never touched a panel; Dick Johnson eventually won the race and the championship.”

With most of Queensland suffering from devastating flooding in recent weeks, the hardest day that Harding had to deal with came during the last big Queensland floods, in 1974, which saw the track under water.

“I had a big drag race meeting that weekend and I had one of the American cars in the garage at the track,” explained Harding.

“I went up to SeaWorld, got in a speedboat, went up the river and it was just like the recent flooding of the Brisbane river – there were pontoons and building coming down the river.

“We came across the road, still in the speedboat, went through the gates into Lakeside and my office was a metre under water.

“The main straight was eight or nine feet under water. That’s the most traumatic time that I’ve had.”

For Harding his time at Lakeside and Surfers Paradise were not just a job, he has a true affinity with the tracks, and while the Surfers Paradise circuit is long gone, he still manages to find time to travel out to Lakeside to keep an eye on it.

“Lakeside is really my ancestral home in regards to motor racing,” said Harding.

“Even though I spent 16 years at the Surfers Paradise circuit, Lakeside is my favourite.

“I go back there and look at it; I’m delighted that it’s up and running again, albeit in a less active role.

“Supercars have now outgrown the track, but it is my home.

“Surfers Paradise was great and wonderful to be a part of, but it is now a housing estate. Lakeside is still there and I am proud of it.”

Having had one of motorsport’s longest careers, Harding retired in 1998.

“I have been thoroughly enjoying my retirement,” said Harding.

“I rarely go to a motor racing meeting.

“A couple of years after my retirement, my contemporaries were kind enough to invite me to events but the invitations dropped off when new people came on board.

“I haven’t been to a V8 event for many years.

“I play a lot of golf, I’m involved in the administration of golf on the Gold Coast and my wife and I like travel.

“We go overseas when we can, life’s good.”

Lakeside is preparing to celebrate its 50th anniversary. Plans are underway to recognise this important Queensland motor racing date, in which Harding will be involved.

The vision below includes the battle for the 1981 ATCC title between Dick Johnson and Peter Brock at Lakeside Raceway.