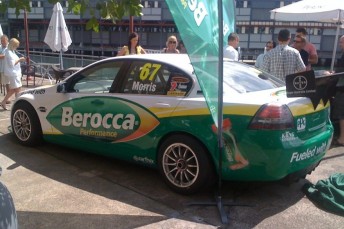 A Berocca-backed Commodore VE, with Morris’s name and number on the window, was spotted today at the Sebel Pier 1 Hotel at Dawes Point in Sydney during a Bayer function – the company that owns Berocca.

The actual car is one of Morris’ ‘Super School’ cars – a driver training/entertainment facility at its Norwell, Queensland base.

Berocca was recently confirmed as a subsidiary sponsor of PMM, with logos adorning the #39 Supercheap Auto Commodore of Russell Ingall.

Berocca is a new name to the sport – one of a number of new backers that PMM has brought into V8 Supercars this year, including Hungry Jacks and VIP Petfoods. 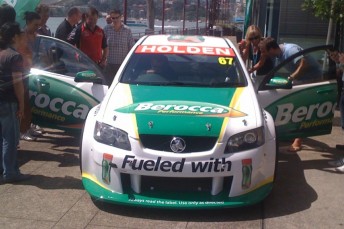 A front-end pic of the Berocca machine

Morris competed in a limited Fujitsu V8 program last year in the LOVE Machine, which he shared with Jack Perkins in the latter rounds of the series.

Perkins is slated to drive a second PMM car in the Fujitsu Series, if the right budget can be sourced. Perkins has also been confirmed as Ingall’s co-drive for the endurance races, with Morris set to partner new team signing Steve Owen in the #49 VIP Petfoods car.

Speedcafe.com.au spoke to Morris did not comment on if the livery on the Berocca Commodore will be used on a race car this year.