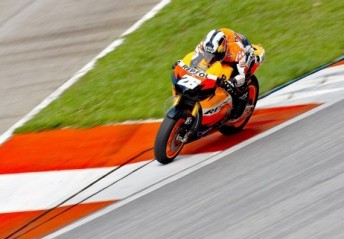 Dani Pedrosa ended Day 2 of 3 at MotoGP’s Sepang test on top of the time sheets, as the Repsol Honda team continued its impressive form.

Pedrosa’s fastest time of 2:00.770 was set on just his fourth flying lap, with team-mate Casey Stoner’s late flyer only good enough to bring the Australian within 0.7s of the Spaniard.

The American completed 60 laps of the circuit, 21 more than Pedrosa, testing a new engine and electronic configuration for the M1.

The Majorcan continued to test the latest Yamaha M1 chassis.

“Today we continued to work on the bike, we found some positive things and some not so good,” said Lorenzo.

“I think we have found more traction but maybe a little vibration we need to resolve.

“We’ve improved a lot of little things, and I have to continue to work on improving my riding as well and to give the team the best explanations I can on the developments to help them move forward.”

With Marco Simoncelli and Hiroshi Aoyama filling fifth and sixth on the Gresini Hondas, the fastest Ducati rider was Hector Barbera, down in 10th position.

Having been 12th fastest on the opening day, the Italian manufacturer’s star signing Valentino Rossi again struggled with his shoulder injury on Day 2.

The nine-time World Champion spent the day assessing aerodynamics, and reported that Ducati’s unique front-wing system was not to his liking.