Jonothan Webb: No excuses to be outside top 10

Jonothan Webb: No excuses to be outside top 10 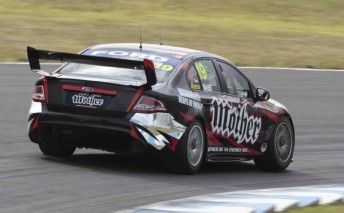 The former Fujitsu V8 Series champ was one of the revelations of the 2010 V8 Supercars Championship, finishing 13th overall in his Dick Johnson Racing-prepared Falcon FG.

This year, Webb has gone it alone, preparing and running his own Tekno Autosports-entered Falcon.

Despite the change of off-track scenery, Webb has high hopes and is confident that he can improve on last season.

“Last year was above and beyond expectation,” Webb told Speedcafe.com.au.

“The boys have worked really hard over the break, and we’ve got a car that is as good, if not better, than we had last year. I see no reason why we shouldn’t be able to score a few more top 10s than we did last year.

“My rookie year will be hard to beat, but I’ve got no excuses this year, I’ve got to go bigger and better. We need as many top 10 results as we can.

“Qualifying was our weakness a bit last year so we’re going to work hard on that, try and get ourselves in some shootouts and see if we can end the series inside the top 10. That’s the main aim.”

Mother Energy Drinks is again Webb’s title sponsor – a brand he is pleased to have support him.

“They jumped on board midway through last year, and with the race win at Sydney and a few other things we did, they were keen to jump back on board,” he said.

“We’ve given the car a bit of a tidy up, a fresh look, and everyone thinks it looks great.

“I can’t wait to get over to Abu Dhabi next week and kick into it.”

The 2011 V8 Supercars Championship kicks off at the stunning Yas Marina Circuit on February 10-12.