DJR told to change numbers on its car doors

DJR told to change numbers on its car doors 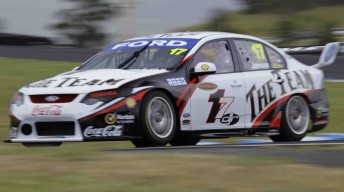 Dick Johnson Racing has been told to colour in the numbers on the doors of its race cars as it contravenes the sport’s regulations.

At V8 Supercars Eastern Creek test day on Saturday, the Jim Beam-backed team ran large #1s on the doors of its #17 and #18 cars in recognition of its success in last year’s V8 Supercars Championship.

With champion driver James Courtney leaving Jim Beam Racing for the Toll Holden Racing Team, DJR was set to use the large #1 (and small #7 and #8) at Eastern Creek and Abu Dhabi, but V8 Supercars Australia has requested the team to change the scheme.

While the team did take Courtney to the drivers title, the #1 stays with the champion, and DJR’s cheeky reminder has been brought to a halt.

While the size of the #1 can remain in its large format, the famous Queensland squad as been asked to ‘colour in’ the #7 and #8 on the two cars to avoid confusion and respect the champion.

“It’s mainly as a respect to the championship which goes with the driver as per the rule book,” V8 Supercars media manager Cole Hitchcock said.

“They are only going to run that particular scheme at the test day and Abu Dhabi anyway.

“The conversation was very amicable, and as far as Adam (Perry, V8’s motorsport manager) is concerned, there’s no issues with either party.

“Everybody saw the humour and the point to the numbers at the test day. That was all very well and good, but when we get to the championship proper, the #1 on the door must be given the due respect from a sporting perspective.”

DJR will launch an entirely new colour scheme at the Clipsal 500.