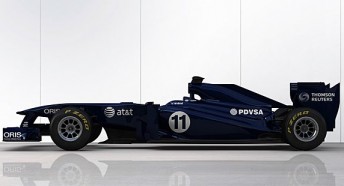 The Williams-Cosworth FW33 has appeared in the Valencia pitlane in a special testing colour-scheme.

The Grove-based squad is optimistic that the new car will be competitive this season – with the raft of rule changes for 2011 potentially working in the small team’s favour.

“Until you start testing you’re never sure how you’re going to stack up against the opposition, but we’re optimistic,” he said.

“We think this is a good car, but we’ll have a better overall picture in a few weeks time.”

“The design of this year’s car has been pretty smooth.

“We’ve improved our way of working by increasing the communication between the mechanical and aerodynamic departments, and that improved our decision making processes.

“It allowed us to increase the optimisation time spent on each part of the car.”

While the introduction of Pirelli tyres and the re-introduction of KERS have dominated the news headlines, Michael sees the banning of double diffusers as the critical rule change of the off-season.

“The double diffuser ban is pretty significant,” he said.

“Not only can you not open any holes between the reference and step planes, you must have continuous material through all lateral and longitudinal sections.

“The scope for developing anything on the diffuser is limited, so we’re looking at the centre, rear

and front of the floor, as well as the sides of the floor and the little area around the tyre spat, all of which are still free.

“The ban on double diffusers should tighten up the field.

“It will probably happen straight away, but even if it doesn’t and someone comes to the first or second test with something you hadn’t thought of elsewhere on the car, it’ll be easy to replicate it and get it onto the car quickly because it shouldn’t affect the underlying car structure such as the gearbox.”