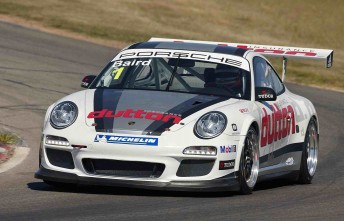 The reborn Carrera Cup Championship has kicked into life after yesterday’s official test day at a sweltering Winton Motor Raceway.

Thirteen cars and drivers used the day to get used to their new machinery, while the other nine cars that have been sold were taken by their new owners back to their workshops.

Of the 13 cars at Winton, Craig Baird’s Porsche (pictured) was the only car that featured sign writing. All of the other cars were plain white.

Baird is the highest profile name to be confirmed at this point, while another confirmed starter is Nathan Tinkler. The mining magnate, who was close to securing ownership in Dick Johnson Racing late last year, has purchased a 997 Cup Car. Tinkler will also compete in this weekend’s Bathurst 12 Hour.

According to Porsche Australia’s motorsport boss Jamey Blaikie, the test went to plan.

“We had a trouble-free day. All 13 cars ran very well, despite the hot conditions,” he said.

“It was good to have the 13 cars there. No everyone elected to do the test, some took the cars straight home.

“There are still some drivers to be signed, but all 22 cars have been sold.”