Perkins gets early testing laps ahead of enduros

Perkins gets early testing laps ahead of enduros 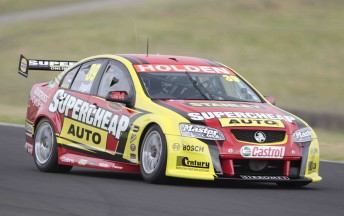 Jack Perkins received some handy test miles at Eastern Creek last Saturday ahead of his endurance seat alongside Russell Ingall in the #39 Supercheap Auto Commodore VE.

Perkins, the son of touring car legend Larry Perkins, will drive with Ingall in the Supercheap Auto Commodore VE at the 500km and 1000km events respectively, reuniting the surnames that won the Bathurst 1000 in 1995 and 1997.

It will be the second time that Perkins Jr and Ingall have raced together after they teamed up for last year’s Armor All Gold Coast 600.

Perkins got an early taste of his endurance race car, completing a number of laps in Ingall’s Supercheap Auto Commodore VE at Eastern Creek last Saturday. 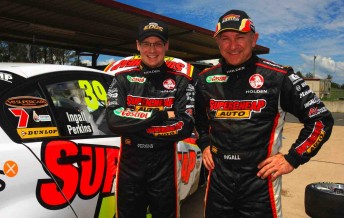 Famous names, but can history repeat? Perkins and Ingall teamed up last year at the Gold Coast 600

“It was good to have a run,” he told Speedcafe.com.au.

“I haven’t driven a V8 since Sandown and I haven’t driven this car since Surfers. It was good to get some laps, especially on a track that is identical to Phillip Island. It was just good to shake off the cobwebs.”

Perkins said that the opportunity to drive with Ingall for PMM in Triple Eight built chassis was too good to refuse.

“I based my decision on the team and the equipment,” he said.

“Triple Eight gear sets the standard. It’s top shelve. It leaves no questions unanswered in terms of machinery, so it’s good to know that I’m driving the same stuff as Whincup and Lowndes.

“I’m looking forward to getting to Phillip Island and Bathurst to see what it’s like.

“Racing at Surfers Paradise last year was pretty cool – seeing Perkins and Ingall on the window. To be able to take that to Supercheap Auto 1000 in the Supercheap car is great. We’ll be giving it everything we’ve got.

“I think we’re a good combination too. We sit in the same seat, he’s only just a bit shorter than me, so we don’t need any seat inserts or anything. We had good driver changes at Surfers Paradise so it all seems to work well.”

Perkins drove with Stone Brothers Racing and Tim Slade at Phillip Island and Bathurst last year, finishing with a career best result of fifth at the L&H 500 Phillip Island.

While Perkins is expected to compete in the Fujitsu Series with Paul Morris Motorsport, he says the deal isn’t completely over the line.

“There’s probably more to lose now, especially with Triple Eight and Walkinshaw running cars. I want to be out there to win. There’s a couple of good things in the pipeline. Hopefully we can make them work.”