Morgan wins in the West

Morgan wins in the West 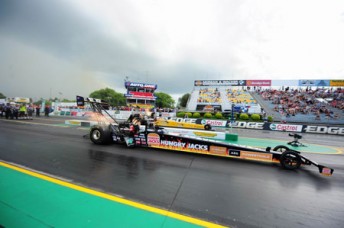 Morgan’s closest rival in the title chase, Andrew Cowin, was the top qualifier with a bonus points earning 4.770 second pass at 318.020 miles per hour, however a first round loss to event runner-up Phil Lamattina saw his run ended early.

Morgan made the most of it, disposing first of reigning champion Martin Stamatis in round one, before taking on Terry Sainty in round two.

Lamattina was also in hot form, defeating Phil Read in the semi finals after his Cowin face-off, with an extremely tight margin – 4.806 seconds to Read’s 4.808 seconds.

When it came down to the final, Lamattina struck tyre smoke, while Morgan barrelled down past the finish line minus his chutes to end up in the sand, but happy with an event win courtesy of a 4.832 second pass at 313.58 miles per hour.