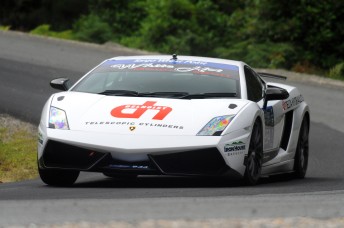 The Lamborghinis of Jason White and Kevin Weeks have been locked in an intense battle for Modern honours across the opening day of Targa Wrest Point in Hobart.

Weeks set the pace on the first three stages of the day on the way to the Tahune Airwalk south of the Tasmanian Capital, but White charged back down the hill to take 16 seconds from his rival and move into the lead by 12 seconds at the half way mark.

The Tasmanian and reigning title holder was never headed again, but his buffer was reduced at the end of the day to just six seconds, ensuring an enthralling dual between the two Italian super cars on the final day.

White, with co-driver, John White, have been the benchmark in tarmac rallying over the past 12 months, but they certainly didn’t have things their own way today.

“Tomorrow’s the day we want to be in the lead,” said White. 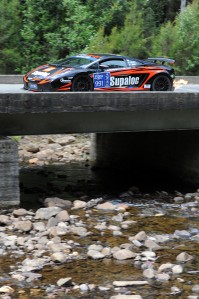 “We’re very happy with the results so far – you can’t do much better than being in the lead.

“We went as fast as we could, and there’s a couple of stages we’re hoping tomorrow might suit us a little more than some of the other cars. We’ve equalled times with Kevin (Weeks) on Longley, so it will depend tomorrow on how much homework he’s done, and he’s obviously done a lot.

Weeks is out to add to the Targa High Country title he won last year.

“But that is definitely our aim.”

Steve Glenney, driving the Mazda RX8 SP is in third place 45 seconds off the pace, 14 seconds ahead of Queenslander, Tony Quinn, in his Nissan GTR. West Australian Dean Herridge, runner-up at this event last year, was back in fifth place in his Subaru Impreza WRX STI, just six seconds further back.

The competition is just as tough amongst the Classics, with just five seconds covering the top three chasing outright honours for those cars built before 1986.

Victorian Peter Eames, the reigning title holder, won only two stages for the day in his1974 Porsche 911 Carrera RS, but it was enough to give him the lead.

But Tasmanian David Cooper is just four seconds off the pace in his 1977 Torana A9X, with Victorian Nick Ellis just one second further back in his Porsche.

Andrew Miedecke was the leading Classic car on the pre-lunch stages, but a mechanical problem on the day’s fifth stage left his hopes of a class victory in tatters.

In the handicap competitions, Tasmanian Geoff Duggan and brother Leon lead Late Classic, while Andrew Bryson is the man to beat in Early Classic.

Day two of Targa Wrest Point will see competitors tackle a further seven stages to the south of Hobart, with a competitive distance of 80 kilometres.