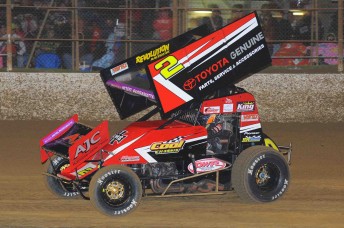 Figuring he had to get to the front as soon as possible from his sixth starting position, the driver of the Toyota Genuine Parts Maxwill-Cool caught and passed early leader Kerry Madsen within seven laps. “We decided to sprint for the first 15 laps to get track position, then look after the tyre mid-race and have enough left for the finish,” said the relieved winner.

The race ran 37 laps non-stop until Darren Mollenoyux blew his tyre to set up a final dash to the Sungold Stadium finish line. Tatnell’s nerves at regrouping his rivals immediately behind weren’t helped by a rock knocking a hole in a rocker cover whose oil then began to obscure Brooke’s vision. Luckily Madsen was dealing with his own issues having sensed a slowly deflating tyre from lap 10 onwards. “Just as well the race ran that many laps under green as that allowed us to keep some air left in it,” admitted Madsen.

A rousing third was Classic winner Steven Lines who forged his way past many rivals from 10th spot, deposing Grant Anderson in sight of the finish. An impressive effort from Tasmanian youngster Jamie Bricknell netted him fifth in spite of coping with a front wing askew from contact. Outgoing national champion James McFadden confessed of his sixth place, “We probably ran too hard a tyre as it took too many laps to heat up by which time I had dropped back from my original fifth row start.”

Rounding out the top ten was a disgruntled Garry Brazier (“too hard a right rear”), a late surging Robbie Farr, David Murcott (“down to the canvas using up the tyre so that I was a sitting duck at the restart”) and pole sitter Max Dumesny who slid backwards through the field as the race unfolded. Only the cars of Mollenoyux, Kelly Linigen and Kris Coyle finished on the infield in an interesting race that featured much place swapping behind the two leaders.

“The greatest form of motorsport in the world is Sprintcars,” avowed Tatnell, “and nothing beats Warrnambool. My Krikke Motor Sport team are the best in the country. We took a gamble and I was scared to death by the tyre selection but we gave it all we had and everything went to plan. I nearly ran out of tear-offs with all that oil!” Madsen graciously conceded, “Forget our deflating tyre, he is a deserving winner and just smoked me but I’m proud of the effort my guys put in. Every time I come here it is awesome and I love the place.”

“I didn’t start from where I wanted to,” reflected Lines. “The car was good enough to do the job but I simply wore the tyre out getting up to where I was.”

The 20-lap last chance B-Feature saw winner Cameron Gessner and third-generation Victorian Nick Lacey claim the final row at the back of the title while Darwin’s Ben Atkinson and Danny Reidy had to watch the race from the infield as reserves. The eventful C-Feature resulted in South Australian duo Ricky Maiolo and Jason Loveday transfer. Meanwhile several cars failed to reappear from the previous night – notably Ian Madsen – but a huge effort saw Perth’s Luch Monte return in a brand new car assembled after his previous night’s hard crash.

For  a comprehensive wrap of all the action from the Australian Sprintcar Championship, make sure you pick up a copy of Oval Express magazine – on sale on the first Wednesday of every month.