Minor updates to IRWIN livery for 2011

Minor updates to IRWIN livery for 2011 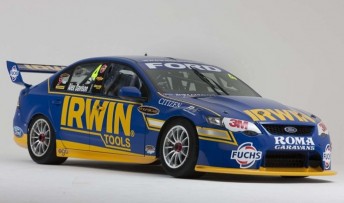 The livery of the IRWIN Tools Falcon FG has been slightly updated compared to when it was first launched last month.

The #4 Stone Brothers Racing Falcon has had the majority of the silver removed, replaced by a thicker yellow line around the shirts of the car.

The Queensland-based SBR team released its studio images of all three of its cars, with a few surprises still in store.

According to the team, the #9 SP Tools livery will come into its own when it hits the track in Abu Dhabi with its partly fluorescent scheme.

“The new look and logo comes from a new product line that we’ll be revealing at Clipsal this year,” SP Tools Kevin Davis said. 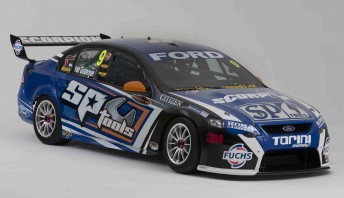 “Our market has always been at the younger end of the spectrum and we feel that this new design will appeal to that demographic. Also, having a young gun like Shane on board helps us reach that market because they can relate to him.”

The #47 Lucky 7 entry of Tim Slade is the first time that the convenience store chain has taken a naming-rights position after being a secondary partner last year.

“We realised very early on the synergy between V8 Supercar fans and our customer base,” Lucky 7’s National Marketing Manager Craig Matthews said.

“V8 Supercars are a great fit for our brand and after having a good year with Stone Brothers last year, this really is a natural progression from that and a sign of our commitment to the team. 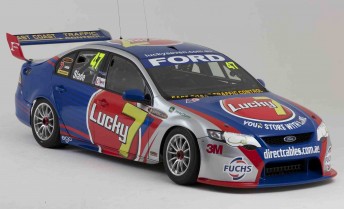 “Having Tim as an ambassador for our brand also allows us to reach our demographic with someone young and exciting. With Tim’s marketability there’s no doubt we’ll be able to further leverage our association throughout the year.”