The Kiwi, who recently underwent chemotherapy after a tumour was removed from his abdomen, hoped into the #8 BOC-backed entry, completing eight laps around the Sydney circuit.

Richards would not speak on the record, but was pleased to be back in a race car after a difficult number of months battling his illness.

While Jason Richards will not be making comments to the press today, team manager Chris Clark said that it was great to have Richards’ smiling face back at the track.

“It’s brilliant. I think it’s great for him to turn up today,” Clark said 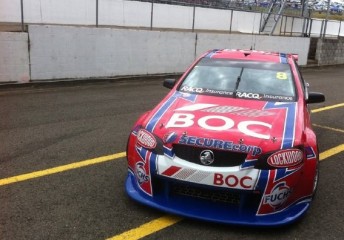 Richards heads out onto the track this morning

“JR has gone through a lot with the chemo, and to be able to pump out eight laps. He did some reasonable times on pretty shagged tyres.

“It was good to see a big grin come out of his crash helmet.”

Clark, like everyone in the V8 Supercars community, is hopeful of seeing ‘JR’ return to the fold as soon as possible.

“We’re barracking and hoping that he has a speedy recovery,” he said.

“Who knows when he’ll come back? We’ll have to wait and see.”